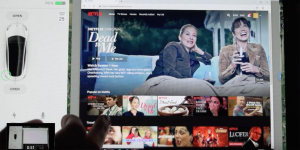 For obvious reasons, Tesla blocked the video streaming options for the displays in their vehicles. However, an innovative Tesla owner managed to get the popular video stream platform Netflix running on the touch screen of his Model 3.

First, one hacker apparently got to watch Terminator (what else?) on her Model S 17-inch touch screen, but it was complicated. Since Tesla updated its in-car internet browser, another Tesla owner found a way via remote computer access. You can find out how here.

While being stuck in traffic is one of the biggest drawbacks of this transport modality, sitting in your car when the traffic is backed up for miles would be less annoying if you could stream your favourite TV show – But even more useful would be being able to stream while charging.

For the many Tesla owners who have apparently been asking about being able to stream videos while they charge their steeds, it’s good news then, that Tesla CEO Elon Musk said he plans to deploy free Wifi at Tesla Supercharger stations. He also said that Tesla was already planning to add a video streaming feature to the “version 10” update, but this has not yet been given concrete details regarding when this might become a reality.

Just make sure you don’t do streaming and driving, even on autopilot – you don’t want to turn Easy Rider into Car Crash.