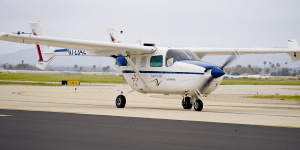 Ampaire describes the successful flight of its 337 around Camarillo Airport in Southern California as an “important step for aviation”. With its six seats, the Ampaire 337 is the largest aircraft to date to lift off with a hybrid drive.

The aircraft is based on a Cessna 337 Skymaster, but the engine was heavily modified. The battery-operated electric motor replaces a combustion engine of the original twin-engine configuration of the aircraft. The resulting system is a “parallel hybrid”, i.e. the combustion engine and electric motor work together to optimize power output in flight. In the hybrid configuration, the aircraft reduces greenhouse gas emissions and reduce operating costs.

The test flights are scheduled to last until August. Once the data has been evaluated, Ampaire plans to launch a pilot project on the Hawaiian island of Maui at the end of 2019. A second converted Cessna 337 with several improvements will perform short scheduled flights. This is also Ampaire’s target group: regional airlines offering short-haul flights in remote areas such as islands.