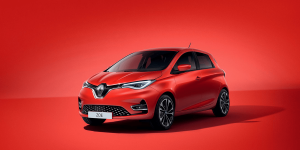 Renault has officially launched the new edition of their Zoe electric vehicle. The model known as Z.E. 50 has a 52 kWh rechargeable battery with a range of up to 390 kilometres. The battery of the old Zoe 40 remains the same with 41 kWh.

The optically and technically revised Zoe 50 also gets a new electric motor: the self-developed unit (sales name R135) has an output of 100 kW. Another novelty is quick charging capability via CCS – but only with up to 50 kW and not with up to 100 kW, as earlier rumours had said. The Zoe continues to support a charging capacity of up to 22 kW via AC. The new charging port is hidden under the brand emblem on the front.

With the model upgrade, a new driving program will also be installed: According to Renault, if the automatic lever is set to “B” instead of “D”, one-pedal driving will be possible. Instead of applying the brake, in most cases the recuperation delay is sufficient. At the same time, the Zoe also features a new braking system: disc brakes on the rear axle will also decelerate instead of the drum brakes previously used.

The new Renault Zoe also includes an upgraded cockpit with a 9.3-inch touchscreen based on the networked Easy Link multimedia system and new driver assistance systems. The instrument unit has also been replaced by a ten-inch display on which a navigation map can be projected directly into the driver’s field of vision, depending on the equipment. Besides, the windscreen now comes with special acoustic glazing, which is why the interior should be significantly quieter.

Renault has not yet announced prices. The updated model, however, is intended to build on the success of the current Zoe. By the end of May 2019, Renault had sold around 150,000 units. In 2018, with 40,000 new registrations, the Zoe achieved a market share of 12.8 per cent in electric vehicles in Europe.