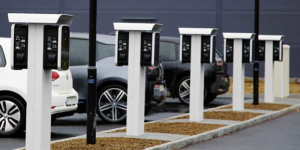 The Israeli city of Kfar Saba near Tel Aviv is planning to build 500 charging stations for electric cars. Two companies have already won the corresponding tender.

Namely, EV Edge and Milgam won the contract worth 15 million shekels (almost 3.7 million euros). As reported by the Globe regarding inside sources, the first stage of the undertaking will be installing 40 stations across the city. Except for two DC stations with 50 kW, the rest of the charging points will be AC chargers with a charging capacity of 22 kW.

The charging stations are to be built on municipal parking lots and footpaths along city streets and municipal roads. In this way, citizens without their own parking space and private charging facilities are also being encouraged to buy an electric car. The majority of use is to be accounted for by citizens with “permanent agreements” and only the smaller part by spontaneous charging, company fleets or cars government employees.

The charging plan is part of a larger-scale plan that goes beyond merely switching ICEs with EVs: the city also aims to reduce the use of cars. This is to be achieved by introducing electric rental cars, as well as encouraging citizens to use LEVs, such as e-scooters while making public transport more efficient.

Kfar Saba is located about 15 kilometres northeast of Tel Aviv and has just under 100,000 inhabitants. Tel Aviv and Kfar Saba are the only two Israeli cities planning a local network without the support of the national Ministry of Infrastructure and Energy.

The Ministry recently announced the companies awarded three tenders for the installation of hundreds of charging stations. Parking lots at large malls in Tel Aviv, Beer Shava and Jerusalem will be provided with charging points, as will the employee parking lots of nine large companies. The ministry is funding up to 75 per cent of the costs. The Ministry of National Infrastructure, Energy, and Water Resources most recent tender was for shopping and leisure centres. Nine companies were selected for installing a total of 812 stations at 148 sites.