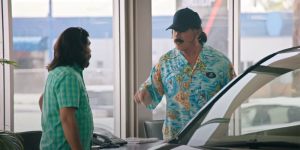 Now that’s advertising: Arnold Schwarzenegger dressed up as a car salesman trying to extol the virtues of gasoline cars to people who actually want to buy electric cars. Arnie’s comic skills really come to shine in this hilarious ad.

The “Kicking Gas” advertisement is commissioned by Veloz, a consortium of more than 40 vehicle makers, utility companies, government agencies, and advocacy groups determined to accelerate the uptake of electric cars in California. Veloz plans to share the four-minute video online and pay for it to be promoted on Facebook and Instagram. Veloz has also rented 34 digital billboards across California for four weeks to draw attention to the video on Veloz’s website.

The advertisement works pretty well anywhere since the advertisement prank points out the value of electric drives over the use of fossil fuels without referring to any specific EV product or region. If you didn’t love Schwarzenegger before, you probably do now.