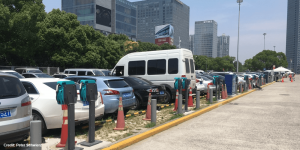 Subsidies for battery electric buses, city cleaning electric vehicles and electric vehicles purchased by government agencies are not affected by the change. Similarly, fuel cell vehicles will continue to receive both municipal and state subsidies.

Earlier this year, the Chinese government announced that it will be cutting its subsidies for electric cars this year before they are to be completely abolished by 2020. Also, in an effort to focus the wild electric car startup environment in China, the government tightened regulations for startups. The country with the world’s largest electric vehicle market also recently changed its number-plate allocation laws. Although all of these moves will enable non-Chinese vehicle manufacturers more of a look-in than was previously the case.

The abolition of municipal subsidies means that “product prices will become more rational” and will be based on competitiveness and market demand, Lian Qingfeng, a manager of Beijing-based manufacturer BAIC, told the state news outlet Technology Daily.