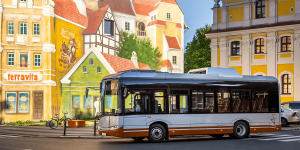 The German Federal Ministry for the Environment (BMU) is supporting the use of electric buses in a further five cities: Aachen, Bochum, Gelsenkirchen, Duisburg and Offenbach am Main will receive grants totalling €14.3M for the purchase of around 70 electric buses.

In all five cities, the annual average nitrogen oxide values were above the allowed limit. For the German Minister for the Environment, Svenja Schulze, German cities need to modernise their local transport systems. “This is the right consequence of the diesel crisis and the excessively high nitrogen oxide levels in the air,” says Schulze according to a statement. “With our support programme, we want to make electric buses affordable and thus an option for all transport companies”. The first buses in the five cities are to be deployed gradually, in some cases this is already happening this year.

According to the BMU, it is currently supporting eleven projects throughout Germany with around 180 million euros, from which a total of around 530 electric buses will be procured. All told, however, this is only a small portion of Germany’s buses. According to the ministry, around 55,000 buses are currently in use in public transport in Germany. Their CO2 emissions amount to up to 4 million tons, which corresponds to approx. 2.5 per cent of the total CO2 emissions of traffic.

For many public transport operators, high acquisition costs and one-off investments in the charging infrastructure are an obstacle. When purchasing e-buses, the ministry subsidises 80 per cent of the additional costs compared to comparable diesel models. The remaining cost is subsidised by the BMU with 40 per cent.

In Bochum and Duisburg, the state of North Rhine-Westphalia and the federal government share the subsidies. Here the state supports the purchase of the vehicles with 60 per cent and the federal government additionally 20 per cent of the additional costs. In Duisburg, seven electric articulated buses are to operate on the 934 line from spring 2021. “The line is predestined for conversion to electric buses because it is directly connected to our bus depot,” says Klaus-Peter Wandelenus, Technical Director of Duisburger Verkehrsgesellschaft. This is important because the necessary charging infrastructure is to be built at the depot.