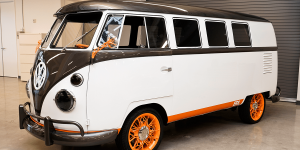 With the ID.Buzz, Volkswagen wants to build an MEB-based electric successor to the legendary bus but not until 2022. In the USA, the Group has already presented an electric new edition of the classic VW bus.

It really is a special steed: The Type 20 concept is a 1962 VW bus with eleven windows, converted to electric drive and equipped with modern technology. The presentation was made for the occasion of opening the new Innovation and Engineering Center California (IECC), which emerged from the former Electronics Research Laboratory (ERL). The IEEC is to become Volkswagen’s largest vehicle research facility outside Germany.

The data given for the VW bus concept car named a sober “Type 20”, are sufficient. According to Volkswagen, the electric drive delivers 90 kW, the torque is 235 Newton metres. The battery has a capacity of only 10 kWh – as a show car, the Type 20 does not have to drive long distances.

The chassis and interior of the concept car are more futuristic than the engine. As soon as the camera hidden in the windscreen detects that the driver is approaching, the air suspension quickly adjusts the car to the optimum entry height.

A facial recognition camera opens the door. Engadget rightly commented that this is ideal for surfers (for whom this vehicle is the ultimate steed) who would, therefore, be able to avoid a wet fumble with salt-soaked keys.

The windscreen – separated by a central bar as in the original – is also a holographic screen. This enables the driver to see important information in the form of a giant display. An improved speech assistant (with several directional microphones, whereby the interior has been divided into three acoustic zones) is also intended to make operation much easier.

Incidentally, Volkswagen has dispensed with an important future technology from Silicon Valley though, the Type 20 has no autonomous driving functions.