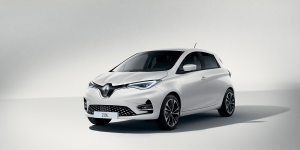 Renault UK has unveiled its ‘Electrify July’ sales event, which sees its entire range of electric vehicles available with an additional manufacturer contribution of up to £1,000.

Renault is offering the additional manufacturer contributions on top of existing offers and the Government Plug-in Car/Van Grant only for the month of July 2019.

Renault UK says they have enough Zoe in stock for customers to buy and drive straight away. Zoe is one of Europe’s most popular electric cars and is in use in a number of car-sharing and car-hire offers throughout the continent – more recently in Bristol. In Germany, on the 1 July, Renault Germany announced the new model of the Zoe that features a new battery for much the same price. However, Renault has not stated when the updated version will be available in the UK.

With the July rebates, prices for a Zoe in the UK in July are specifically: the Dynamique Nav model from £17,420; and the S Edition version from £18,270. These prices also include the £3,500 Government Plug-in Car Grant, while battery rental prices start at £69 per month. There is also the full battery purchase option with no monthly battery payments that allows outright ownership of the Dynamique Nav for £24,020 and the S Edition for £24,870.

For those looking for an affordable electric van, the zero-emissions Renault Kangoo Z.E. 33 is available with an additional £500 contribution from the French automaker. The Kangoo is powered by the R75 (60hp) electric motor that provides a real-world range of up to 124 miles, which can typically be fully charged for only £5. A choice of Panel Van, Crew Van and Crew Van Cab versions are all available under this offer. After the offer and the PiVG (Plug-in Van Grant), the electric van is priced from £17,892.

The larger commercial vehicle Renault Master Z.E. also comes with an additional £500 contribution until the end of July. Powered by a 76hp electric motor, the Master Z.E. can cover up to 75 miles in real-world driving conditions on a single charge. The Master Z.E. can accommodate a payload of up to 1,100 kg and is available in a trio of wheelbases – short, medium and long – with, depending on the version, a choice of two roof heights. After the offer and the PiVG (Plug-in Van Grant), the Master Z.E. costs from £45,900.

Finally, also included in Renault’s ‘Electrify July’ event offers is the Twizy, which comes with an extra contribution of £250.  The Twizy comes with a flexible range of battery hire options. The two-seater utilises a 17hp electric motor and has a range of up to 56 miles. With the Twizy, Renault is aiming to provide businesses with an affordable and clean way to make last-mile deliveries – particularly suited to inner city couriers and food delivery services. After the offer, the quadricycle is available from £6,745.