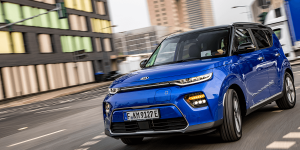 Kia’s 64 kWh electric e-Soul of the ‘First Edition’ is available for order now in the UK, starting with a price of £33,795 after subventions.

When the e-Soul was initially presented at the LA Auto Show last November, the South Korean company announced that the e-Soul would have a motor performance of 150 kW, alongside a torque of 395 Nm and a 64 kWh battery capacity, capable of CCS fast charging – seriously upgraded from the previous editions’ 81 kW motor capacity and 30 kWh battery.

The newest edition of the Kia e-Soul comes with two varieties of battery – a long-range battery edition and the standard. The First Edition will be made up of the long-range version, while the cheaper standard version will be released at a later date. The range for the larger 64 kWh battery version is set at 452 km according to WLTP, however, the US EPA has rated it at 391 km. The battery can be fast charged to 80% capacity in 42 minutes using a 100 kW DC fast charger. CCS is the standard charging option.

The standard battery pack version holds a 39.2 kWh battery, which allows for a 277 km range, according to WLTP. The charging behaviour is identical to the specifications published for the long-range version. Both battery versions are split into three sub-divisions, with the Edition 7 being cheapest, followed by Vision and the more expensive Spirit outfit. Price ranges between the more luxurious versions and the basic ones about to a total of about £4,500. The price difference between the long-range battery and the short range battery is around £2,650, meaning the battery is cheaper than the luxury outfit.

Deliveries of the first edition will begin somewhere in the first quarter of 2020, although the exact date has yet to be specified.