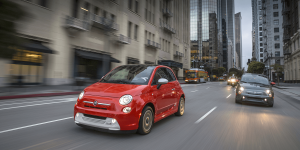 Fiat Chrysler is investing a total of 700 million euros in a production line for the electric version of the Fiat 500, according to media reports citing an unnamed top manager of the company.

The group has already installed the first robot of the future production line at its Mirafiori plant in Turin and plans to manufacture 80,000 units of the electric 500 annually there from the second quarter of 2020. Pietro Gorlier, Chief Operating Officer for Europe, the Middle East and Africa, told Reuters as much.

Since 2007, the current Fiat 500 has been sold in a number of refreshed versions. From 2013, the car was also offered as an electric car in the USA. The 500e became famous also by a statement of the meanwhile deceased company boss Sergio Marchionne, who advised against the purchase of the car for a special reason: “I hope, they do not buy it. Because every time I sell one, it costs me $14,000.” With the new edition, Fiat will probably have its cost structure better under control.

Aiways is planning to launch in Europe in 2020