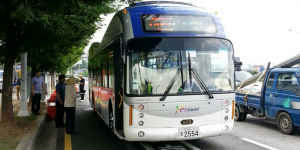 The number of battery-powered city buses on the streets of the South Korean capital Seoul is expected to rise to 143 this year. Private bus companies are being promoted by the city government to ensure that the switch to electric buses is successful.

After the start of the test deployment of 29 electric buses on three routes last November, an additional 114 electric buses are to be used in Seoul from November this year to replace existing natural gas buses.