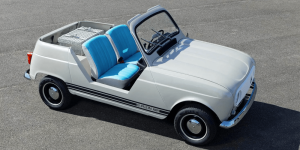 Just as VW regularly presents a new concept for its fan meeting at Lake Wörthersee, Renault has brought a special car for R4 fans to celebrate the tenth anniversary of the 4L International: a modern version of the Plein Air with an electric drive.

The French company didn’t reveal much about the show car. The electric powertrain is to come from the Twizy. The e-Plein Air was created in cooperation between the two departments Renault Classic and Renault Design. The company Melund Rétro Passion, which specialises in parts for classic French vehicles from Alpine, Citroen, Peugeot and Renault, was also involved.

It is not clear how the Renault team rebuilt the R4 in detail. The photos show that the area behind the two two-tone seats has been modified. A white wicker basket with two leather straps is attached to the raised shelf. More interestingly, but nevertheless unknown, is what is hidden underneath: the electric motor or the battery? One of the two components is probably located in the rear, the other under the hood.

Exactly which drive variant of the Twizy was used remains to be seen: The small two-seater is available as Twizy 45 with 6.1 kWh battery, 4 kW power and the name-giving 45 km/h top speed. The more common variant is the one with a 13 kW engine, which can reach speeds of up to 80 km/h. The Twizy 45 has a power output of 4 kW. However, the e-Plein Air is unlikely to achieve the Twizy range of 100 kilometres: Even if Renault does not give any weight details, the retro car will probably be heavier than the Twizy.

Evergrande is working on their first EV