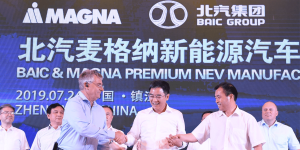 Magna and BAIC have officially signed a framework agreement with the government of the Chinese city of Zhenjiang for the production of electric vehicles. The joint venture, led by BJEV, BAIC’s electric car subsidiary, is Magna’s first investment in a complete vehicle production site outside Europe.

The plant in Zhenjiang can produce up to 180,000 vehicles per year, and the joint venture will take over an existing BAIC plant for this purpose. Production of BJEV’s Arcfox electric models is scheduled to start at the end of 2020. In addition, the bundled competence in the area of complete vehicle production of electric cars at the Zhenjiang location will also be offered to other customers in the future.

The Magna and BAIC joint production was first announced in June 2018. Already at that time, there was talk of a production start in 2020 – in the past 12 months, there seems to have been no major delays.

In January, BJEV and Magna had already opened a development centre in Zhenjiang under the name Magna Blue Sky NEV Technology (Zhenjiang). The Engineering Center will employ about 420 people. The development centre is currently being expanded by a 12,000 square meter test centre, which is scheduled to be inaugurated in September. In April 2018, the two companies laid the foundation for the development centre: Magna was then awarded the contract to develop an intelligent electric vehicle architecture for the Chinese market.

Beijing Electric Vehicle (BJEV) was founded in 2009 by BAIC as a development platform for New Energy Vehicles. The main business area in China comprises research and development, production, sales and service for New Energy Vehicles and NEV core components. Daimler acquired 3.93 per cent in March 2018. As was announced this week, BAIC acquired a five per cent stake in Daimler.