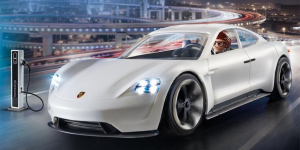 Serious business is child’s play as Porsche has brought its Mission E, the concept that preceded the Taycan, into the new Playmobil animation film. In the feature film, the character of secret agent Rex Dasher drives a white Mission E.

The fun doesn’t stop on screen: with the film, comes the first remote-controlled Porsche from Playmobil with a cute little charging station and laptop. This will presumably be orderable with the release of the movie in August.

The film will be good if the director is anything to go by. Playmobil: The Movie will be directed by Lino DiSalvo, who has worked on a number of blockbusters such as Frozen, Bolt, Tangled or Meet the Robinsons among others. Break a leg!

It’s not what you think…