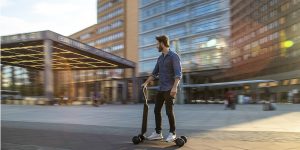 Audi is presenting a four-wheel electric scooter concept that combines the positive characteristics of electric pedal scooters and skateboards. The collapsible Audi e-tron scooter is scheduled to go into production at the end of 2020.

Audi is following the trend and is presenting its own electric kick scooter: With the four-wheel concept, the e-tron scooter is meant to stand out from the two-wheeled competition primarily due to its handling. Audi speaks of a motion sequence that is supposed to remind one of surfing. Practical advantage: Since the driver has one hand free, he can look around better and give hand signals.

Despite the handlebar, the scooter is steered with the feet like a skateboard by shifting the riders weight. “Of course, the e-tron Scooter also drives straight ahead,” says Thorsten Schrader, project manager for micromobility at Audi. “But the flow feeling only adjusts to asphalt when carving – and with our new concept it’s surprisingly simple.

Audi has not yet given any information on the size of the battery, but the range is said to be only 20 kilometers. To cover this distance, however, the scooter is not only dependent on the power from the battery: It can recuperate when braking, i.e. recover electricity like an electric car. Acceleration and recuperation are controlled via a rotary handle. In addition, a hydraulic foot brake is installed.

Unlike conventional electric kick scooters, where the battery is built into the base plate, Audi has integrated the battery into the handlebar. This is also where the electronics and display are located. The vehicle weighs 12 kilograms and can be folded up for transport in a car, bus or train – unlike most scooters with two wheels, it can also be pulled like a suitcase.

The e-tron scooter meets the requirements for very small electric vehicles. From the end of 2020, it is planned to sell it to private customers for “around 2,000 euros”, but Audi is also investigating its use in fleets as an alternative. According to Audi, it would also be conceivable to offer the electric scooter as an accessory when buying an electric car. In the boot, the electric scooter could be charged at a specially installed socket.