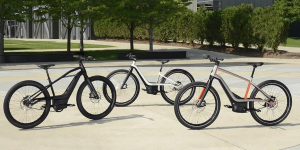 After launching their LiveWire to join the electric motorbike market, now Harley Davidson is planning to bring electric bicycles to the market.

Harley Davidson presented the electric bicycle prototypes for the first time after the announcement that they planed to expand their electric lineup to apply to different consumer groupings about a year ago. Then it was said that that a scooter and an e-bike would follow the LiveWire, alongside two smaller electric motorcycles to round out the market appeal of their electric motorcycles, and keep their aesthetic as a motorcycle company.

To the newly presented electric bicycle prototypes: not much detail has been released beyond the teaser image of the three e-bikes. A small and light framework promises a small battery, and the lack of a second handbrake suggests that Harley-Davidson will be integrating some motorcycle dynamics on their bikes.

When the bikes will be out, or how much they will cost is still up to wild speculation, as all Harley Davidson had to say on the issue was: “Prototype model shown. Production model features will vary. Not yet available for sale. All future models shown may not be available in all markets.”