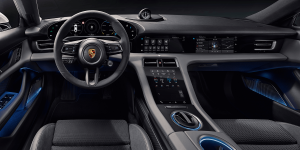 A few weeks before the world premiere of its first electric car, Porsche has released pictures of the Taycan’s interior. The designers say they were inspired by the original 911 from 1963 – which comes with both advantages and disadvantages.

The advantage: the classic proportions of a Porsche interior have been kept the same. The disadvantage: the classic proportions of a Porsche have been kept the same. Tesla drivers and fans will mock the small display (as with the Audi e-Tron and Mercedes EQC), while others will be delighted that they feel like they are sitting in a car and not in front of a giant touch-screen.

According to the German luxury car company, their designers were aware of this balancing act – and opted for a classic interior layout. “We have geared the proportions to the driver because we don’t build smartphones that can drive,” says Gontimur Meissner from the design team. “That’s why we chose a centre console, which is important for the sports car feel.”

The inch specification for the instrument cluster is relative: the display is not only strongly rounded, but also curved. Thus, it is hardly possible to measure real screen diagonal. A scoop does not cover the freestanding display. For this reason, the glass surface was vaporised with a polarization filter, which is supposed to anti reflect the screen. This plan seems to have worked out with a first ride on the passenger seat. However, on the driver’s side, a weak point appears: The small touch control panels are integrated at the edges of the screen to control the light and chassis functions. Depending on the driver’s seating position, these panels can be concealed by the steering wheel – customer feedback will show how this design feature is received.

The driver can choose between four displays on the instrument cluster itself. The classic mode centrally contains a round power meter that replaces the traditional tachometer and displays power output and recuperation. In map mode, the power meter is replaced by a map section, the other displays on the right and left are retained. In full map mode, there are no other displays. The “Pure” view is a reduced mode that is limited to the essential information for night driving, for example, keeping as many displays in black as possible.

The classic hardware switches have also been reduced to the essentials. The majority of the functions are controlled via the central display with revised menu guidance or the 8.4 inch touch control panel with haptic feedback in the centre console. The upper display features navigation, telephone, media and comfort features, while the lower control panel controls the air conditioning system. “The upper half of the display contains the climate control, and the defrost function, which is required by law,” explains Meissner. “Below, we have a remote control panel with handwriting recognition, which replaces a turn/press controller.”

However, Porsche follows the Tesla logic in one respect: the air vents are no longer adjusted with mechanical blades, the airflow is controlled digitally and fully automatically via the display – and with the optional four-zone automatic climate control, also via another screen in the rear.

Speaking of options: for an extra charge, the front passenger also has his own display to increase ease of use. Design and function largely correspond to the conventional central console. For safety reasons, however, the front passenger has no access to features such as suspension adjustment. Those who do not order the passenger display cannot place any decorative panels there – the cover always comes in black clear lacquer. Decors made of wood, carbon, aluminium or textile can only be placed in the doors of the Taycan. Various leather and textile materials are also available at an extra charge.

Porsche followed its tradition on two other points: The Taycan does without an ignition lock, but the power button is still located to the left of the steering wheel. In the Sports Chrono package, a watch is also traditionally placed on the instrument panel. The stopwatch is the only analogue instrument in the entire car, and according to Meissner, this feature was somewhat controversial within the company.