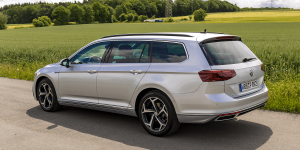 The revised version of the VW Passat GTE is now available for order. The core of the plug-in hybrid is the new battery, which enables a higher electrical range. However, the GTE has also been improved in other respects.

The battery upgrade increases the energy content of the battery by 31 per cent to 13 kWh for a WLTP range of 56 kilometres in electric mode and 54 kilometres in station wagon mode. With the predecessor, the factory specification was still 50 kilometres, but according to the old NEDC standard. Calculating the new values back to the NEDC results in an electric range of up to 70 kilometres for the current model, according to VW.

The crucial technical data is already known: The petrol engine has an output of 115 kW, the electric motor is in the datasheet with 85 kW, the system output is a maximum of 160 kW. Those values correspond to the predecessor. New features include the operating modes of the PHEV. Instead of the previous five there are now only three: in E mode the car drives exclusively electrically, in GTE mode the focus is on sporty driving, while in Hybrid mode the fuel consumption is optimised.

As before, the car is charged via a charging socket integrated into the radiator grille. However, since the maximum charging power is 3.6 kW, the charging process takes up to 4.5 hours. Even after the facelift, there is no higher charging capacity or even a CCS DC socket in the GTE, as in the new PHEV versions of the Mercedes A and B Class. Nevertheless, it is remarkable about the drive that the GTE is the only Passat engine that already complies with the Euro 6d emissions standard instead of the Euro 6d TEMP standard.

For the saloon of the PHEV-Passat, VW requires at least 44,795 Euros, while the Variant is on the price list with at least 45,810 Euros. An environmental bonus of 3,000 euros can be deducted from each of these. However, much more important than the cash price for the classic company car are the leasing rates – with the current company car taxation, the PHEV becomes financially attractive for company fleets.