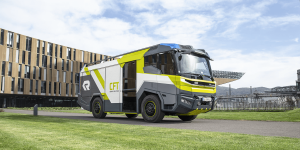 Rosenbauer, that supplies firefighters of Austria and Berlin already, is going Down Under to develop a plug-in hybrid vehicle for first responders in Canberra, Australia. Rosenbauer and the government of Australia’s Capital Territory (ACT) will be working together for two years.

The PHEV fire-fighting vehicle, based on the Concept Fire Truck (CFT) presented for the first time in 2016, is scheduled to enter service in the Australian capital region at the end of 2022. According to the European fire brigade supplier, among other things, this is a completely new vehicle architecture “tailored from the ground up to the future needs of the fire brigades”. This was made possible by the use of electric drives; the architecture is to be geared to trends such as urbanisation and demographic change – for example with smart design for the driver’s cab.

“The partnership between the ACT Government and Rosenbauer will engineer a fire truck that’s far more environmentally-friendly than our current fleet while being well designed for our fire fighter’s needs”, says ACT Finance Minister Mick Gentleman. “This is a substantial step that will help move the ACT closer to achieving a zero net greenhouse gas emissions target by 2045.”

Rosenbauer entered into similar development cooperation with the Berlin fire brigade last year. The name of the German project is “eLHF” and stands for electric fire-fighting and rescue vehicle. The partners are striving to achieve an electrical quota of 80 per cent in regular operation. In other words, four-fifths of all deployment scenarios are to be carried out in a purely electrical operating mode. In the announcement for the Australian project, Rosenbauer has not mentioned this kind of quota – with such great distances, it might be prudent to see how it goes first.

Rosenbauer estimates the worldwide market for CFT architecture to be around 3,200 vehicles by 2030, with 700 to 800 units already in use in Europe by 2025. Although the Austrian company sees the main field of application for CFT technology as being initially the municipal firefighting engine, plans are also in place for it to subsequently be transferred to other vehicle types.