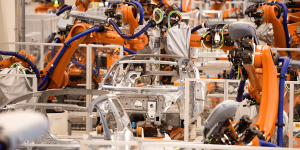 While the preparations for the start of production of the VW ID.3 in Zwickau are in full swing, the necessary financial resources amounting to 1 billion euros for the extensive transformation of the Emden location into an MEB plant have now been finally made available.

This means that the structural changes can now be planned, applied for and implemented step by step. In order to meet the challenges of the MEB, the factory will be rebuilt in several phases, keeping in mind that the electric vehicles should be able to roll off the assembly line there from 2022.

“Over the past three years, we have fought together here at the site to make the plant fit for the future. That was a tremendous effort and a strong team effort,” says the current plant manager Andreas Dick. The new plant manager, Uwe Schwartz, explained: “Here in Emden the second automobile factory will be built in the next few years, which will produce purely electric vehicles for the Volkswagen Group. These investment commitments now also mean security, especially for the employees. Manfred Wulff, Chairman of the Works Council said the plans “…fit in perfectly with our employment guarantee until the end of 2029 and give us and our families security.”

The Supervisory Board had already confirmed the plans for plant occupancy at the future electric car locations in Emden and Hanover in November last year. Now the necessary funds for Emden have been finally released. The VW Group has set itself the goal of converting the Emden location into one of the first locations to exclusively produce electric vehicles in Europe. With the approval of the planned investments, the necessary structural changes could now be planned, applied for and implemented. This would enable the Emden location to “position itself competitively” for the forthcoming transformation. For Emden, the so-called “start of production” of the MEB vehicles is planned for the end of 2021. However, the Passat Variant, Passat Limousine and Arteon will continue to be produced at the site until the first fully electric vehicles are fully equipped.

Some new production areas will have to be built for the plant’s conversion to electrical production: In the area of the stamping plant, an area will be created for the installation of additional stamping tools for the MEB’s production volumes. The production areas of the body shop are to be extended by 12,200 square meters to integrate the MEB’s production capabilities. In addition, a new hall with an area of 23,900 square meters for the MEB substructure is currently being planned. However, the core of the factory conversion is a new assembly hall. In the future, various MEB-based vehicles will be assembled on an area of 49,000 square meters.

At the moment it is still unclear which models will be produced in Emden. The last speculation in May was that the production of the ID. Crozz could be moved from Zwickau to Emden. The electric van, previously known as ID. Buzz, would also be an option.