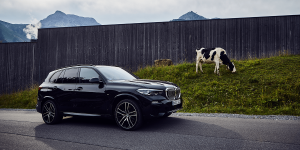 BMW launches the second generation of the X5 xDrive45e. Thanks to a significantly larger battery, the X5 PHEV has one of the highest electrical ranges in the segment.

Depending on the equipment, the X5 xDrive45e will travel a slightly longer distance than other PHEVs – (WLTP) between 67 and 87 kilometres purely electrically. If drivers want to achieve the latter value (at least theoretically), they have to pay close attention to the selected options when ordering. Wide tyres on large rims not only increase the weight, but also the rolling resistance.

This electric range is made possible by one of the largest batteries in the current series PHEV: the high-voltage storage unit has a gross capacity of 24 kWh, of which 21 kWh can be used – more than a BMW i3 of the first battery generation. This results in a WLTP consumption of 1.2 to 1.9 litres, which corresponds to CO2 emissions of 27 to 44 grams per kilometre. BMW estimates the combined power consumption at 23.1 to 28.3 kWh per 100 kilometres. According to BMW, these values are not only due to the larger battery capacity but also to the further developed power electronics, which should enable a more efficient interaction of the two drives.

The X5 xDrive45e electric motor has an output of 83 kW, the straight six-cylinder engine 210 kW. According to BMW, the two drive units together generate a system output of 290 kW and a maximum system torque of 600 Nm. Since the electric motor is located between the combustion engine and the eight-speed automatic transmission, the X5 xDrive45e, unlike the BMW 225xe, is also an all-wheel-drive vehicle in electric mode. The maximum speed in purely electric driving mode increases from 120 to 135 km/h compared to its predecessor, in hybrid mode a maximum of 110 km/h is possible with the electric machine. In contrast, the German carmaker has not given any data on the charging time.

The battery is located in the “underfloor area of the vehicle”, but still influences the boot: the plug-in hybrid still has a capacity of 500 litres, which is 150 litres less than on the combustion models. When the rear seat backrests are folded down, the X5 has a capacity of 1,720 litres.

The base price in Germany is 77,600 euros. However, this is not only due to the drive components but also to the better equipment of the PHEV model: the two-axle air suspension and electronically controlled dampers, for example, are standard, as are some digital services specially designed for electric mobility.