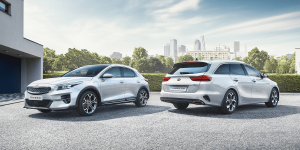 The key data with a 1.6-litre petrol engine, a 44.5 kW electric motor and an 8.9 kWh battery make it clear that the drive train of the Kia Niro PHEV (or Hyundai Ioniq PHEV) is used in both compact PHEV models. The biggest difference: Since the two Ceed derivatives have a lower standard consumption, provisional measurements show a purely electrical range of up to 60 kilometres.

The combined fuel consumption is between 1.3 and 1.4 litres, with Kia predicting electricity consumption of 10.4-12.2 kWh/100 km (Ceed Sportwagon) and 10.5-12.2 kWh/100 km (XCeed) respectively. These are, however, values that were determined according to the WLTP but calculated back to the NEDC. Kia did not communicate the pure WLTP values. The same applies to the range.

The hybrid drive with its system output of 104 kW and a maximum torque of 265 Newton metres accelerates the Kombi Ceed Sportswagon to 100 km/h in 10.8 seconds and the XCeed to 11.0 seconds. The electric motor continues to sit between the petrol engine and the six-speed dual-clutch gearbox.

Regarding charging the Ceed Sportwagon and XCeed – a Type 2 socket is installed on the driver’s side between the front wheel and the door. Although Kia has not given further details regarding charging times, these will probably be similar to the Niro PHEV, which would mean four hours at a household socket, and because of the maximum charging power of 3.7 kW, it’s not much faster at a wallbox with 2:45 hours.

The battery is installed under the back seat next to the 37-litre tank. This hardly affects the boot volume of 437 to 1,506 litres in the Ceed Sportwagon and 291 to 1,243 litres in the XCeed. An optional trailer coupling is also available for both.

The PHEV’s aerodynamically closed radiator grille and the standard fenders of the GT package make them visually different from the other drive variants. The interior also features equipment elements and systems specially tailored to the plug-in variants. For example, the charge level indicator on the top of the dashboard shows from the outside how far the battery has charged.

Kia has not yet revealed pricing details.