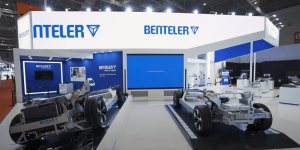 Following the recent announcement of a joint venture with the German drive specialist Hofer Powertrain, Evergrande’s electric car subsidiary is now also cooperating with Benteler and the FEV Group to gain access to an electric car platform. Two Chinese media reports were confirmed on Instagram by NEVS, a subsidiary of Evergrande.

According to the reports, the cooperation agreement transferred the “intellectual property of their world-class 3.0 chassis architecture” to Evergrande. Benteler explained to electrive that they had sold a license for the current version of the “Electric Drive System 2.0” – the system that Benteler presented at the Shanghai Auto Show this April. “Evergrande now has the rights and data to build and develop a Benteler Electric Drive System,” the company said. Benteler will support its customers in this process. The “new energy auto chassis architecture 3.0”, of which the Chinese media write, is a planned but not yet implemented further development based on the “Electric Drive System 2.0”.

At its premiere in April, Benteler described the system as “an example of the company’s entire engineering and metalworking expertise”. These range from components and modules for chassis, body, engine and exhaust applications to modular system solutions in the field of electromobility.

According to Chinese media, the powertrain, suspension, control system and braking system are to be integrated into the 3.0 architecture and are to be particularly variable thanks to the modular design. Since the alleged transfer of intellectual property is merely a license, Benteler’s “Electric Drive System 2.0” business for third-party customers remains unaffected. “We will continue to develop the Benteler Electric Drive System and look forward to working with additional customers,” the company said.

Evergrande is currently spending a lot of money on cooperations and takeovers in order to be able to start production of the first models as quickly as possible: In January, Evergrande Health became the new main owner of NEVS and also acquired 20 per cent of the shares of the Swedish sports car manufacturer Koenigsegg. “Evergrande will strive to become the world’s biggest, and the strongest, electric vehicle group within three to five years,” company boss Hui Ka Yan was quoted in March.

The company plans to set up a production facility for no less than one million electric cars per year and two further plants for the production of batteries with a total capacity of 50 GWh per year. Evergrande is investing around 23 billion dollars in the three plants.

At the beginning of June NEVS also acquired Protean Electric, a British specialist for wheel hub motors. These are to be used in the future electric cars of NEVS and Evergrande. In addition, the Group has taken over the Chinese-Japanese joint venture Shanghai Cenat New Energy Co to develop battery cells. In addition, the cooperation with Hofer Powetrain announced in July to develop electric motors has also been added.

However, a concrete announcement for an initial model is still pending. In July NEVS had started the production of its first electric car – but it is still a car based on the Saab 9-3. NEVS (National Electric Vehicle Sweden) finally took over the rights after the Saab insolvency. Since Evergrande came to power, the old car has been reactivated, overhauled and now marketed as NEVS 9-3.