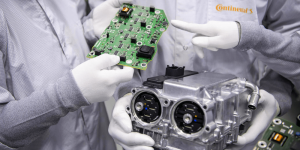 This was decided by the Executive Board of the automotive supplier. Continental is thus expanding its room for manoeuvre “given an accelerating trend toward powertrain electrification and the hard-to-predict conditions surrounding a potential partial IPO in 2020,” the company announced. “The Executive Board and Supervisory Board will decide on the actual implementation after the review has been completed.”

Continental had already agreed with the employees of the Powertrain division in 2018 to secure employment until 2023 for the partial IPO planned to date. According to Continental, this remains unaffected by current considerations. Initially, the company had expected the partial IPO for the second half of 2019 but postponed the project already to 2020 in April.

In August, Andreas Wolf, head of Continental’s Powertrain division and future CEO of Vitesco, had already outlined his strategy. Within the drive mix, Continental anticipates varying dynamics. The market for high-voltage components and solutions for hybridization is growing “much more vigorously than expected.” This faster increase in production would “lead to an economically attractive business earlier than expected”.

“The future is undoubtedly electric. We are convinced of this,” Wolf said at the time. Continental, on the other hand, believes that “only selective growth opportunities will open up in the future” for pure combustion components.

Update 03 May 2020: Continental’s Executive Board has decided not to implement the spin-off mentioned above of the powertrain business Vitesco Technologies this year and to only complete this step as soon as the market environment has improved noticeably and is more stable. The Continental’s Board, together with the management of Vitesco Technologies, will discuss and decide about the transitional period in the coming weeks as they see how the Covid-19 crisis develops.

CEO Elmar Degenhart expressed confidence, however, that “the basis for future market growth has not changed”. The companies would thus complete the step “as soon as the market environment has improved noticeably and become more stable and more predictable”.