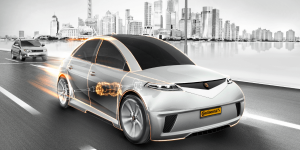 Continental has announced that it intends to focus its drive business more strongly on electrification, but is refraining from earlier considerations of entering into the production of solid-state battery cells.

Within the drive mix, Continental is anticipating a variety of dynamics. The company says that the market for high-voltage components and solutions for hybridization is growing “much more vigorously” than expected. This rapid increase in production “is leading leading to an economically attractive business at an earlier stage than previously thought.”

“The future is clearly electric. We are convinced of this,” says Andreas Wolf, head of Continental’s Powertrain division, which will trade with him as CEO under the name Vitesco Technologies in the future. Continental sees “only selective growth opportunities in the future” for pure combustion components, as they still provide a basis for hybrid vehicles formats.

In addition to rising demand, Continental also cites “tightening political requirements” as a reason. This leads to an increasingly disruptive market for which the supplier wants to prepare. “Our customers are increasingly and consistently turning to the electrification of combustion engines through hybrid drives as well as to pure battery-powered vehicles,” says Wolf. “With this strategy and gradual optimisations to the portfolio, we aim to ensure that the powertrain business remains financially strong, competitive and sustainable in the long term.”

This also means less investment in combustion engines. Such a decision has already been made in the hydraulic components business – this applies in particular to injectors and pumps for gasoline and diesel engines. “Investments in research and development and in production capacity for innovations are becoming less profitable,” says Wolf. Existing contracts will be fulfilled and new orders will play an “ever smaller role”. The business with components for exhaust after-treatment and fuel delivery will also be reviewed, and a partnership cannot be ruled out.

But it is not only in the case of combustion technologies that decisions have been made against an investment: Contrary to earlier considerations, Continental will not enter into the production of solid-state battery cells. “the disruptive market no longer offers any attractive economic prospects for battery cell production for Continental,” the supplier wrote in a press release. “In the future, Vitesco Technologies will concentrate primarily on areas where we can benefit from competitive advantages and develop attractive business models,” says the future CEO Wolf. This does not seem to apply to battery cells. Following Bosch, another top supplier is thus rejecting the risk of battery cell production.