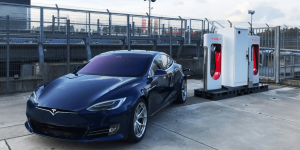 Tesla is planning the production launch of their Model S with a triple-motor Plaid powertrain in October or November of 2020. Measures are also being taken to boost profits for the running quarter.

The announcement came following a prototype of the vehicle beating the Taycan on the Nurburgring. While no technical data is available on the new configuration, it did manage to complete a lap in 7 minutes and 42 seconds. Musk also seems confident that the performance can be improved on the way to serial production.

To boost sales before the end of the third quarter this year, Tesla also is allowing sales employees to throw in two years of free charging at Superchargers for new orders of the Model 3, as well as providing other discounts. The latest deals will go until the end of the month, which coincides with the quarter.

Starting next quarter, Tesla is planning to address a few logistics issues. Taking inspiration from Amazon’s delivery practices, Tesla has decided to change from its current model of a delivery being initiated upon agreement with the client. The company will now move finished vehicles to delivery centres for customers to pick up at their convenience. As Musk puts it: “Amazon would go bankrupt if they would have to wait for customers to be ready to take delivery before shipping.”

Finally, Tesla has also released initial information about the coming software update V10, which is expected to launch soon. Among other things, the update will allow drivers to stream video content when the car is standing still and connected to a WiFi. The update is very entertainment-focused, tweaking the system in several ways, as well as adding new entertainment options such as “Caraoke” or Cuphead – Tesla Edition.