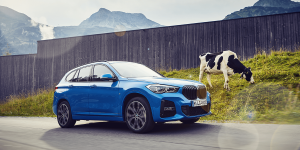 BMW only recently redesigned the X1. With the plug-in hybrid X1 xDrive25e, another model variant of the compact SUV is now coming onto the market.

Until now, the X1 was only available as a hybrid electric car on the Chinese market. This version has a petrol engine with 100 kW and an electric motor with 70 kW. In spring this year, the battery grew to 24 kWh. For Europe, however, the powertrain looks different.

In the newly introduced X1 xDrive25e, a 1.5-litre petrol engine with 92 kW drives the front wheels, while rear axle is driven by a 70 kW electric motor. The combustion engine and the electric motor generate a combined system output of 162 kW. The maximum torque is 385 Nm. The top speed of the plug-in hybrid model is 192 km/h. In purely electric mode, the PHEV has a top speed of 135 km/h.

The electric motor receives its required energy from a lithium-ion battery with a gross energy content of 9.7 kWh. According to WLTP, the PHEV has an electric range of 50 kilometres. This means significantly less capacity and less electrical range than the Chinese version. On a wallbox, the battery can be recharged within 3.6 hours, while this takes about five hours at a household socket.

With this step, BMW is continuing the electrification of its model range. At this year’s Geneva Motor Show, BMW had already underscored its ambitions in the PHEV sector and put the spotlight on the second generation of a series of partly-electric vehicles. The new generation of the BMW 530e and the BMW 225xe followed at the beginning of August and a PHEV engine for the 3 Series Sedan followed in mid-August. Just over a month ago, the German carmaker announced the launch of the second-generation X5 xDrive45e.