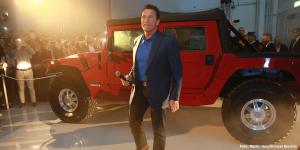 Arnold Schwarzenegger is supporting Greta Thunberg on her journey through North America. The former Californian governor has made an electric vehicle available so that the climate activist can travel purely electrically through the USA and Canada.

Schwarzenegger and Thunberg already know each other from a climate summit in Schwarzenegger’s country of birth (Austria) in May – as you can see in the governor’s tweet below. Apparently, now Thunberg can call on the star of The Terminator and former Californian governor if she needs anything. And what she needed was some emission-free transport. And no, he did not lend her his enormous electric Hummer (pictured above)…

… but apparently organised a Tesla Model 3 for her. Which, by the way, she won’t be old enough to drive yet, so she will need a driver.

The former action star has really put himself out there for electric vehicles, and you will notice that the photo that he has on his Twitter profile, pictures him dressed as the character he plays in a very, very funny advertising campaign for electric vehicles, where he dressed up as a used car salesman trying to get people who want an electric car to buy a fossil-fuelled vehicle instead.

Are carmakers banking on EU Supercredits with delays?