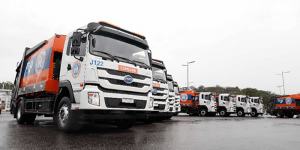 Within the next six months, BYD is to deliver an additional six electric trucks and five more by the end of 2020. The electric trucks have a storage capacity of 15 cubic meters and have previously been extensively tested by the Comlurb waste management company. Due to their quiet drive, the trucks will also be able to be used for night journeys in residential areas.

According to BYD, the T8 can cover a distance of around 200 kilometres with one battery charge, which is equivalent to approximately eight hours of operation under normal traffic conditions. Thanks to a regenerative braking system, the electric truck can also generate electricity by recuperation when rolling out and driving downhill.

Neither BYD nor Comlurb have given any information on the purchase costs. The manufacturer only states in the communication that the operating costs of an electric truck are only about a quarter of the costs of a diesel truck.