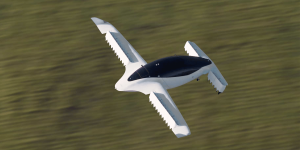 The Munich-based German startup Lilium has published new images of its all-electric Lilium jet on the occasion of the now completed first phase of flight tests. The vertical take-off aircraft (VTOL) now flies increasingly complex manoeuvres at speeds over 100 km/h. The new Lilium Jets are now available in a variety of different models.

The five-seater jet celebrated its world premiere in May 2019. Around this time, Lilium also made its maiden flight with the aircraft. Since then, the flight tests have made great progress: The new photos show the aircraft for the first time at the transition from vertical to horizontal flight, which according to Lilium, is “one of the greatest challenges in aviation”. The company says that in horizontal flight, the jet can fully develop its range advantages thanks to the lift of the two wing pairs. It is much more efficient than an aircraft powered exclusively by rotors.

Lilium aims to position a fleet of electric aircraft in cities around the world by 2025. Specifically, by operating its own Lilium jet, the company intends to establish an on-demand air taxi service that, thanks to a dense network of landing sites, will guarantee flights “that are comparable in price to a taxi, but four times as fast”. According to Lilium, trial operations at several locations will begin before 2025. The five-seat VTOLs will have 36 electric engines, be up to 300 km/h fast and have a range of up to 300 kilometres. The goal is to connect entire regions with each other and not to limit oneself to short distances within an urban area, Lilium announced.

In Europe, the startup initiated the approval process for the new Lilium Jet in the spring. In addition, the USA, with its large number of helicopter landing pads and airfields, is regarded as a key market, which is why Lilium intends to gain a foothold there as well. In the meantime, Lilium has also collected around 100 million dollars to finance its development activities. Among the donors is the Chinese Internet giant Tencent.

Lilium has also completed its first plant for the production of the Lilium jet. With an area of 3,000 square meters, it is located directly next to the company’s headquarters. It will soon be followed by a second, even larger plant at the same location. According to Lilium, the two plants will enable it to produce hundreds of aircraft a year as planned at the start of operations in 2025.

Lilium has also just announced the addition of Airbus expert Yves Yemsi to its management team. Yemsi will be the new Chief Program Officer, having previously been responsible for the proven Airbus A350 as Quality Expert. It was only in June that the startup announced the appointment of more new managers. Management appointed Anja Maassen van den Brink as Chief People Officer (CPO) and Luca Benassi as Chief Development Engineer. At the same time, Lilium also announced the creation of a “world-class software team” in London led by Carlos Morgado.

“We are convinced that regional air mobility can make a positive contribution to society by connecting all cities, from small to large, within a radius of 300 kilometres, fully electrically and at high speed,” says co-founder and CEO Daniel Wiegand. “We are making rapid progress as planned with the testing of the Lilium Jets,” he explains. In addition, thanks to the engineers on-site, preparations for mass production are being made in the first plant.