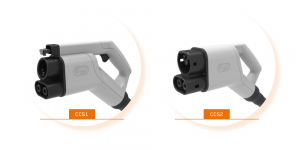 ITT Cannon, a subsidiary of the US conglomerate ITT, is presenting a liquid-cooled DC charging solution at eMove360° that is designed to charge electric vehicles up to 500 kW.

The company states that the connector can deliver 500 amps of current at 1,000 volts. Electricity for 100 miles is to be charged in three to five minutes. ITT Cannon’s HPC solution is already available in the CCS1 and CCS2 versions for the North American and European markets, according to the announcement.

The design concept uses a dielectric coolant that flows from the cable through the connector’s contact system, providing improved heat dissipation. The fluid is non-flammable and non-toxic, according to ITT Cannon. In addition, the cable is weight-optimised and ergonomic and user-friendly due to a smaller diameter.

The German manufacturer Phoenix Contact had already introduced a CCS2 charging plug-in 2017, which is designed for a charging power of up to 500 kW. However, the corresponding charging stations – and also the cars – are still missing. Even the Porsche Taycan as the first series car with 800-volt battery voltage cannot fully utilise the maximum possible 350 kW at present. The CharIN CCS initiative, on the other hand, is already working on a new charging standard of up to 3 MW – for trucks, however.