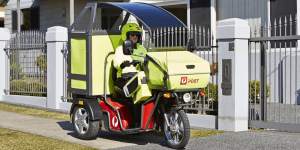 Kyburz of Switzerland will deliver 1,000 additional electric vehicles to Swiss Post in Australia by the end of next year. The Australian Post had already ordered 1,000 of the three-wheeled electric vehicles from Kyburz in February.

The new order means Australia’s mail service is doubling is its electric vehicle fleet when it comes to trikes. While the first order has only begun to arrive – Kyburz says “two sea freight containers filled with KYBURZ DXP vehicles are currently leaving the Embrach production plant daily for Australia” – delivery is planned to commence over the next three years. With over 150 eDVs already out delivering, Australia Post expects the next lot of 961 vehicles to be wheeled out around the nation by February 2020.

The EVs used in Australia drive at speeds with up to 45 kph and offer a range of up to 115 km. The load capacity is 120 kg or 270 kg with a trailer, according to the Kyburz website. Each of these e-trikes is equipped to transport over 100 small parcels and up to 1,200 letters. For small packages from online trading, Australia Post expects a 20% increase this year and a record flood of parcels states Kyburz in its press release.

Also Australia Post General Manager Deliveries Queensland, Angela Creedon stressed the importance of the vehicles for the service. More so, the company “made modifications such as adding an overhead canopy, dash cams, a hydraulic seat, speed limiters, engine immobilisers and automatic storage locking systems, based on feedback from posties,” she said. Indeed, Kyburz offers a range of delivery trikes that can be adapted. All electric vehicles are made at the company’s facility in Embrach in the canton of Zurich.

However, the Swiss EVs are just one part of a more considerable electrification effort. The Australia Post began testing electric delivery vehicles back in 2017, and have since expanded the operation to all Australian states. Over the next three years, at least 5,980 light electric vehicles are to be deployed Down Under. This includes the roll-out of 4,000 new e-bikes.