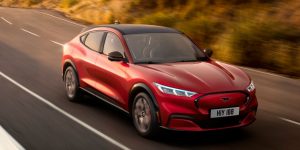 The Ford Mustang Mach-E, an all-electric SUV, will hit the markets in North America and Europe by the end of 2020, starting with a special ‘First Edition’. The latter is the all-wheel-drive version that puts out 244 kW and 582 Nm. Range with the bigger battery will be around 434 kilometres or 270 miles. Before-tax, the special edition starts at 59,900 dollars (approx. 54,305 euros).

As an option, the basic version is also available with a second motor and thus with all-wheel drive. The system performance remains the same, but the torque increases to 582 Nm. In this case, however, the range drops to a maximum of 338 kilometres.

In addition, there is a ‘California Route 1’ variant at a price starting at 52,400 dollars (approx. 47,505 euros). However, these are only available with four-wheel drive and the large battery. In this case, the system output is 207 kW and a torque of 415 Nm. Ford estimates the range to be up to 480 kilometres.

The offer is rounded off by a ‘GT’ version with all-wheel drive at a base price of 60,500 dollars (approx. 54,849 euros). Ford has yet to comment on the system’s performance. However, the larger battery should offer a range of up to 380 kilometres.

For the market launch at the end of 2020, only the ‘First Edition’ and the premium models will be available for the time being. The other versions are due to be launched at the beginning of 2021.

Following the markets in North America and Europe, Ford is to offer the electric car in China at a later date as well. The Mustang Mach E will be made in America and imported to Europe.