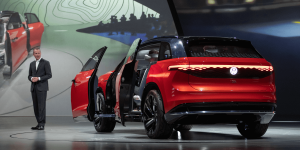 With its Chinese partners, Volkswagen Group China is increasing its spending on electric cars to around 1.6 billion euros next year in order to further accelerate its electrification strategy in China.

According to official figures, around 1.6 billion euros is to be invested in the production of electric cars which is around 40 per cent of the company’s total China investment of over four billion euros. The funds will be used to advance areas such as production, infrastructure, development and research.

By the end of this year, the Group will already be offering 14 electrified models in China. With the start of production at the plants in Anting and Foshan, a total capacity of 600,000 units per year will be available for the production of MEB-based vehicles alone from the end of 2020. With the unveiling of sketches for the ID. Space Vizzion earlier this month, Volkswagen also announced that pre-series production recently began in Anting, the company’s first factory in China, which will also focus entirely on electromobility. The SAIC Volkswagen factory in Anting near Shanghai is scheduled to start series production in October 2020.

“Today, almost every fifth car sold in China comes from the Volkswagen Group. In a challenging market environment, our strategies are paying off,” said Stephan Wöllenstein, CEO of Volkswagen Group China at the Guangzhou Auto Show. “I am looking forward to 2020 when our local e-car production will significantly increase in scale. Success in e-mobility will be a key driver for reaching our sustainability target, becoming net carbon neutral by 2050,” said Wollenstein, who did not announce any concrete models.

Volkswagen Group China intends to launch a total of 30 locally produced electrified vehicles on the Chinese market by 2025. From 2025, around 1.5 million electric cars are to be delivered to customers each year. At the beginning of this month, VW revealed the details of its electric vehicle roadmap in China during a presentation of what the carmaker calls the New Brand Design in Guangzhou. To reach its 300,000 plug-in car target, VW is planning to launch ten electrified versions of existing models (PHEVs and EVs) on the local market until the end of 2020. These will soon be followed by MEB-based models. By 2023, VW expects its Modular Electric Drive System to have gained significant traction in China, thus helping the brand to increase the number of offered electric vehicles toward the one-million mark.