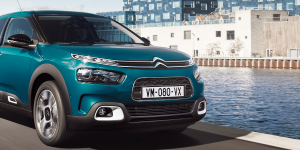 The electric C4 Cactus will be Citroën’s first battery-electric car for the mass market – except for the smallest car C-Zero, which is an identical offshoot of the Mitsubishi EV (i-MiEV). Citroën will rely on the same multi-energy platform CMP from PSA on which the Peugeot models 208 and 2008, as well as the Opel Corsa and the DS 3 Crossback and their BEV variants, are based. This adds a fourth model to PSA’s compact electric family.

Jackson did not confirm directly confirm this in a media interview. Still, the technical data of the all-electric C4 will probably correspond to that of the e-208 or Corsa-e: The battery of the previous e-CMP models is 50 kWh, the electric motor 100 kW. Depending on the model, the range is a little over 300 kilometres due to the different empty weights and body shapes.


“The C4 Cactus will be a very important launch for us,” Jackson continued. But she didn’t say when the production of the combustion and electric versions would start. Citroën has to hurry not only given the more modern CMP models from its group, but also because the sales figures of the current model are falling increasingly. According to JATO Dynamics, more than 79,000 units were sold in the best year of 2015, but this year sales in Europe fell by eight per cent to just under 46,000 units by October.

It remains to be seen whether the C4 Cactus will continue to be sold with this designation or only as C4. At its premiere in 2014, Citroën positioned the Cactus as an eye-catching crossover version of the conventional C4 compact car. However, the latter has now been discontinued without a direct successor in favour of the C4 Cactus.

The Citroën brand boss also confirmed plans for electrification beyond the C4 Cactus. “By 2025, 100 per cent of our range will have electrified versions,” Jackson said. The first model to receive a plug-in hybrid from 2020 is the compact SUV C5 Aircross. The C5 Aircross builds on PSA’s larger EMP2 platform and is related to the Peugeot 5008, DS 7 Crossback and Opel Grandland X. The EMP2 offers two PHEV variants – one with pure front-wheel drive and a more powerful version with an additional electric motor on the rear axle, providing temporary all-wheel drive. Jackson did not specify which version of the C5 Aircross will be available.