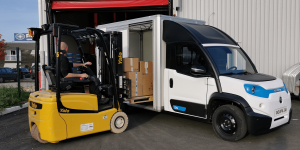 Goupil has now introduced prototypes of their new electric van, the G6. At the Solutrans trade fair in Lyon, the French manufacturer of light electric vehicles presented the model in two versions – with a box body and as a tipper truck.

The new van is expected to go into production in the fourth quarter of 2020 and will then join the existing range, consisting of the lightweight models G2, G4 and G5. With the G6, Goupil has now designed a transporter that is significantly increased in size. It has a total weight of 2.6 tons and a maximum load capacity of around 1,200 kg. The cab offers space for three people.

Goupil presented the G6 as a ready-to-run prototype in two different versions. On the one hand, with the box body of the companies Palkit and Libner with about 900 kg payload and nine cubic meters load volume. On the other hand, as a roll-off tipper, which was developed in cooperation with Dalby and has a payload of around 800 kg. In addition to these variants, Goupil will later also offer a refrigerated version of the G6 and a passenger transporter.

Goupil was founded in 1996 and has been part of the Polaris Group since 2011. According to own statements, the French company produced more than 20,000 LEVs (Light Electric Vehicles) to date and marketed them across 35 countries.