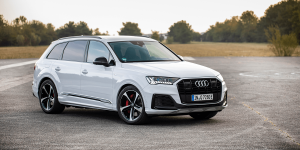 Audi has started advance sales of the Q7 TFSI e quattro in Germany and other European countries. The plug-in hybrid SUV is available in two power levels with 280 kW and 335 kW. In each case, however, the electrical range is not excessive.

According to Audi, both variants achieve a purely electric WLTP range of up to 43 kilometres. While the remaining plug-in hybrids presented by Audi over the last few months (whether combined with four-cylinder or six-cylinder petrol engines) rely on a 14.1 kWh battery for the hybrid system, according to Audi’s Q7 press release, the two new variants use a 17.3 kWh lithium-ion battery. This power storage unit – consisting of 168 prismatic cells arranged in 14 modules – is located under the luggage compartment floor and can be liquid-cooled.

Due to the battery, the boot volume is reduced from 865 to 650 litres compared to the conventionally powered versions – but only in accordance with the VDA standard. The battery means that the storage compartment under the boot floor is no longer required – the floor itself forms a flat loading edge and remains unchanged.

Both variants of the Q7 PHEV rely on the 3.0-litre V6 petrol engine. This delivers 250 kW of power and 450 Nm of torque, the exhaust fumes are cleaned by a gasoline particulate filter, among other things. According to Audi, the differences between the two hybrid versions result solely from the design of the electric motor. This can deliver up to 94 kW and 350 Nm and is integrated into the housing of the eight-speed automatic transmission, so the four-wheel-drive remains in electric mode.

The top model Q7 60 TFSI e quattro has a system output of 335 kW and a maximum torque of 700 Nm due to a different boost strategy of the permanently excited synchronous motor. The combined fuel consumption is also between 2.8 and 3.0 litres per 100 kilometres according to WLTP, the combined power consumption is slightly higher with values between 22.2 and 22.9 kWh/100 km. This variant achieves the standard sprint 0.2 seconds faster. In both cases, the Q7 can drive up to 135 km/h in E mode and 240 km/h in combustion mode.

Audi has not provided specific information on the charging performance of the two plug-in hybrid variants in their press release. The charging capacity of the PHEV models presented so far was 7.4 kW – however, due to the slightly different battery sizes, the charging times of 2.5 hours at 7.4 kW and 6.5 hours at a household socket cannot be directly transferred to the Q7. After all, the Q7 comes with a Mode 3 charging cable as standard and not just a Mode 2 cable for household sockets. The charging connector is located above the left rear wheel, analogous to the tank nozzle on the right side of the vehicle.

As with the other recently introduced PHEVs from Audi, the Q7 starts in electric mode and only switches to hybrid mode when required. This means that the car is exclusively driven electrically as long as the driver does not exceed a variable, perceptible pressure point in the accelerator pedal. Only then does the car switch to hybrid mode. However, the EV mode is activated again each time the engine is started.

The hybrid mode is activated either automatically with the destination guidance in the navigation or manually by the driver with the EV softkey on the lower MMI display. In this mode, the Q7 PHEV uses the interaction of the electric motor and the combustion engine in such a way that as many driving stages as possible can be covered electrically. In battery hold mode, the battery capacity is kept up to date by the drive management system.

The assistance systems presented in the A7 Sportback 55 TFSI e quattro are also used to increase the efficiency of the PHEV drive. The “Predictive Operation Strategy” (PBS) plans the use of battery power during active route guidance based on numerous live data in such a way that inner-city routes are driven as electrically as possible. The “Predictive Efficiency Assistant” (PEA), which is already familiar from other Audi mid-range and luxury models, takes care of the detailed planning with which the car manages drive control.

Audi intends to achieve delays of up to 0.3g by means of recuperation alone. Audi says this will give up to 80 kW of recuperation power. The transition between electric and hydraulic braking should be “almost imperceptible” and the brake pedal should remain finely adjustable.

The Audi Q7 55 TFSI e quattro can be ordered immediately in Germany and select European markets at a basic price of 74,800 euros, the Q7 60 TFSI e quattro costs at least 89,500 euros. The market launch begins at the end of the year. According to Audi, in Germany, both versions meet the requirements for the reduced company car tax of 0.5 per cent of the gross list price.