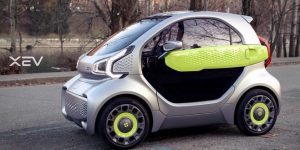 Italy’s XEV has launched a crowdfunding campaign for the electric car presented in 2018 from the 3D printer. The vehicle called Yoyo will be offered in Europe for 7,995 euros – and for even less during the Kickstarter campaign.

In the spring of 2018, Chinese media reported that the little electric car would initially be launched on the Chinese market, although there was never an official statement on the matter. Meanwhile, while all is quiet on the Chinese front, the two-seater is to take off via crowdfunding in Europe. As a campaign goal, XEV mentions revenue of almost 560,000 euros. The Italians are aiming to start production in August 2020.

For the first time, technical data of the 750 kg light electric vehicle is now available. Accordingly, the 2.5 metres long, 1.5 metres wide and almost 1.6 metres high mini electric car will have an electric motor with 7.5 kW continuous output, with a peak output of up to 22 kW being available for 30 seconds. The maximum speed is 70 km/h – so the Yoyo is not suitable for motorways. The energy storage is a lithium iron phosphate battery (LiFePO4) with a capacity of 9.2 kWh, which, according to the manufacturer, is sufficient for a range of 150 km according to UDDS (Urban Dynamometer Driving Schedule).

The battery can be charged at home or charging points. On the other hand, the Italians also want to establish a self-designed battery changing system. Buyers who opt for this option get the battery replaced automatically. To do this, XEV evaluates GPS data and commissions technicians to arrange an exchange appointment if the battery level is low.

For the above price, future buyers will receive a two-year warranty on the vehicle and a five-year warranty on the battery. Anyone who supports the company via the crowdfunding campaign can reduce the purchase price again, in the best case to 5,999 euros. Up till today at 2 pm European time, 57,000 had already been raised of the 560,000 euro goal 51 days remaining of the campaign.

A prototype of the Yoyo was on show at the Turin Motorshow last summer. The prototype presented there was already the second ready-to-drive study version. The first drafts date back to 2016.