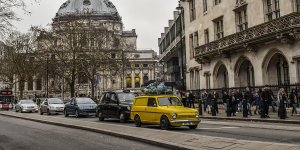 The Mayor of London, Sadiq Khan, the TfL and London Councils are investing £4 million across 29 boroughs to install 1,000 new electric vehicle charging points in residential areas throughout the British capital.

So far, 1,500 charging points have already been installed across the city aiming to provide for Londoners without access to off-street parking using solutions such as retrofitting lamp posts.

In June this year, Mayor Khan presented a plan for a comprehensive expansion of the city’s charging infrastructure, estimating the need for charging points up to 2025. The Mayor is also aiming to ensure 80 per cent of journeys are made by public transport, walking or cycling by 2041.

The £4 million allocated to boroughs is part of a £13 million award London received from the Government’s Office for Low Emission Vehicles’ Go Ultra Low City Scheme, a nationwide programme to increase electric vehicle use to address air pollution and climate change.

As of the 28th December, EV drivers will be able to access a new charging hub in Stratford that allows six vehicles to rapid charge simultaneously. The new hub is funded by the TfL and operated by electric vehicle charging network provider Engenie. The hub in Stratford is the first of five hubs that are planned across London as part of the London Electric EV Infrastructure Plan. Earlier this month, Transport for London hit its target of 225 rapid charging points across the capital before the end of the year.

London is ahead of the rest of England when it comes to electric vehicle infrastructure – a quarter of all charge points in the UK can be found in the capital. The Mayor of London, Sadiq Khan, said: “The overwhelming success of London’s Ultra Low Emission Zone shows both Londoners and businesses alike are ready to play their part.” He extrapolated that: “I want to help people switch to public transport, walking and cycling and want all new cars and vans in London to be zero-emission by 2030. Today’s announcement will help us to continue to work together with London boroughs and the private sector to deliver a major expansion in charging infrastructure and an electric vehicle revolution in the capital.”