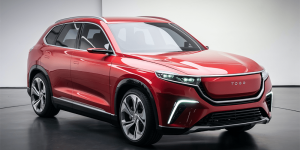 The renowned Italian design studio Pininfarina designed the electric vehicles that Turkey is looking forward to producing domestically. Two configurations with 200 HP or 400 HP will be available with axle-mounted electric motors providing the drive. Whether this applies to both vehicles or just the SUV was not clarified; however, it is not unthinkable that they share a platform.

Acceleration with the larger motor setup from 0 to 100 km/h is possible in 4.8 seconds with a range above 500 km. Charging the battery will take less than 30 minutes to an 80% charge. The smaller motor features a single electric motor mounted on the rear axle, taking 7.2 seconds to reach 100 km/h with a 300 km range.

“Today, we are witnessing a historic day of realizing Turkey’s 60-year dream together,” said president Erdoğan during the unveiling ceremony. He added that Turkey “is not only a market for new technologies but has also become a country that develops, produces and exports them all over the world.”

Interestingly, this marks the second time Turkey has presented an electric prototype, with the first taking place back in 1961. The Devrim unfortunately never made it past the prototype stage, however. These models will be significantly more modern than their predecessor, featuring Level 2 autonomous driving capabilities, with designs to improve to Level 3 with over-the-air upgrades. Furthermore, the TOGG group will introduce a holographic assistant, which will provide futuristic user experience, according to the manufacturer. The aim is to add 3D imaging and augmented reality technologies to display information for the driver. Ostensibly this would mean the driver would never have to take their eyes off the road to keep an eye on speed or their battery charge.

Production will take place at a new factory in the Gemlik district of the northwestern Bursa province starting in 2022. There TOGG aims to produce up to 175,000 vehicles across five model types by 2030.

Update 20 July 2020: Construction of the first car plant of a domestic manufacturer is now starting in Turkey. It is to be completed within 18 months and will have capacities for up to 175,000 vehicles per year as planned above.

President Recep Tayyip Erdoğan was at the groundbreaking ceremony and said the construction of the vast production complex “will radically change the perception of a factory in people’s minds,” the Daily Sabah reports.

The facility will include centres for research and development and a customer experience park. 4,323 staff, including 300 qualified personnel, will be employed here.

Turkey’s car project under the TOGG umbrella will see a fixed investment of over TL 22 billion ($3.21 billion). By 2030, TOGG hopes to produce one million vehicles in five different models described previously.

Update 11 August 2020: Germany is to become the first export market for the TOGG electric SUV from Turkish production, which was presented in January. In Germany, the vehicles are to be sold from 2022, parallel to the planned market launch in Turkey. Later, the company also plans to export to France and Italy. “Our team is ready for global competition,” TOGG CEO Gürcan Karakas said at an online press conference.

By the time sales start in 2022, subsidies at the current level will have expired, at least in Germany: In its current version, the “innovation premium” is limited until 31.12.2021. The Turkish company has not yet announced how TOGG will price its electric SUV. According to Karakas, the price will be “competitive”.

Meanwhile, further details about the supply chain have also been revealed. According to Karakas, the battery will be manufactured in Turkey. “We have agreed to bring a global company with expertise in battery production to Turkey,” the CEO said. However, Karakas did not name the exact scope of battery production, i.e. whether it is cell production or just the assembly of battery modules and packs.

Overall, Karakas is very self-confident. “We are not searching for suppliers; world-famous producers and suppliers apply to work with us,” said the CEO at the press conference. The company has completed “most of the supplier selection process” – 78 per cent come from Turkey, 22 per cent from Europe and Asia.

Karakas is apparently already planning beyond the production of his own vehicles and is considering a kind of contract manufacturing. “We can undertake the production of several products, including batteries, for other companies,” says Karakas. They are able to manufacture and procure parts and products of the globally known brands.