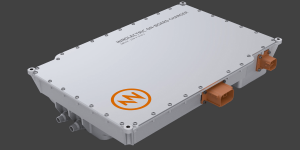 The German company Innolectric has completed the development of its 22 kW onboard charger with silicon carbide technology and intends to start series delivery from the second quarter of 2020. According to the manufacturer, demand is high.

Innolectric says that work on the charger was completed by the end of 2019, and in the meantime, series production has started – the first units are to be delivered in the second quarter. According to Innolectric, it has worked closely with STMicroelectronics on silicon carbide technology.

The onboard charger from Innolectric offers 22 kW charging power in AC operation and, as a “one-device solution”, takes over the entire charge management including the necessary communication with the charging infrastructure for AC and DC charging. Thanks to integrated charging communication in accordance with all current international standards such as IEC 61851, DIN SPEC 70121 and ISO 15118, the device is intended for international use.

In the OBC42 version, the onboard charger is designed for a voltage level of 400 volts (220 – 501 volts) and thus covers charging scenarios up to 22 kW, but can also manage DC charging processes. According to the manufacturer, the maximum efficiency is over 96 per cent and a minimum of 94 per cent over the range from 2 to 22 kW.

Innolectric has developed the OBC82 variant for vehicles that operate with 800 volts system voltage. This unit is designed for 400 to 850 volts and also has a maximum output of 22 kW. The charging power “can easily be increased by connecting several Innolectric On-Board Chargers in parallel”.

According to Innolectric CEO Tim Karcher, “The product is not a compromise, but a solid solution for the commercial vehicle and machine sector thanks to its high efficiency and performance”. The number of current inquiries exceeds expectations “by far”.

When silicon is replaced by silicon carbide in semiconductors, switching times are reduced and operation at higher temperatures becomes possible. The material will be used in further applications in electric cars in the future, as the efficiency can be increased. In September, the supplier Delphi announced that it had received an order worth billions from a car manufacturer for an 800-volt inverter based on silicon carbide.