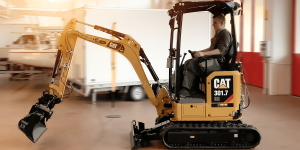 On behalf of Avesco AG, the Swiss battery system manufacturer Ecovolta has equipped a vehicle based on the Caterpillar Cat 301.7 with an electric drive and will supply its battery systems for series production. The mini excavator will be available for order from spring 2020.

Ecovolta already produces lithium-ion traction batteries that are used in trucks, vans, forklifts or boats. Batteries from this standardized system are also used in the electric mini excavator. According to the company, the dimensions, equipment and other characteristics correspond to the original machine, but the drive has been replaced.

Ecovolta does not provide any information on the power, but it does provide information on the battery. The current stored in the ‘evoTractionBattery’ with a voltage of 96 volts should be sufficient for three to four hours, depending on use. After that, the machine can be connected to a 400 or 230-volt line by cable, while charging the machine should be able to continue working normally. However, Ecovolta did not mention the exact capacity in communication.

The conversion of excavators is a step towards an emission-free construction site. “The electric mini excavator is particularly suited to work in cities with high levels of exhaust and noise pollution, but it is just as good for construction work in residential areas and near hospitals as well as night-time work,” says Ecovolta Managing Director Pirmin Reichmuth. The mini-excavator is much easier to convert than larger vehicles because of its simple design and comparatively low energy consumption.

In addition to the possible work in noisy or pollutant-resistant areas, the users should also benefit from a cost advantage. According to the client Avesco, the operating costs are about one-third of those of machines with combustion engines. One reason for this is that electricity per operating hour is cheaper than diesel. In addition, the electric excavator requires very little maintenance.

The mini excavator from Ecovolta is currently being exhibited at the Swissbau trade fair in Basel. However, the manufacturer is not yet announcing at what price the vehicle will then be available for order from spring. However, it does say that other construction machines can also be converted with electric drive. Since the manufacturer uses its own standardised and already certified components, the conversion to an electric drive would be easier and faster – among other things because the batteries do not have to be developed individually.