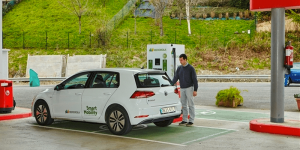 Avia the Swiss-based filling station operator, the Spanish utility group intends to achieve a nationwide distribution of the fast-charging infrastructure with the charging stations at filling stations throughout Spain and Portugal. Iberdrola is planning to set up 25,000 charging points in Spain by 2021 – at “private households, companies and urban and supraregional locations with public access”.

The plan also envisages “the installation of fast, super-fast and ultra-fast charging stations on the main motorways and highways” to reach all provincial capitals and allow long-distance journeys in electric cars across Spain. The press release does not specify the charging capacity of the 500 fast chargers now announced only that the charging stations are to be fed exclusively with green electricity.

As part of the cooperation, Iberdrola will also install solar modules at the service stations. This should partially cover the petrol stations’ own consumption. In addition, both companies want to work together on customer loyalty initiatives. For example, the already more than 300,000 members of the Avia Club will benefit from “special advantages” at Iberdrola.

“With AVIA we have found a perfect ally with which to move forward in the roll-out of long-distance rapid recharging solutions to meet the challenges of electric mobility, based on clean energy free of CO2 emissions,” says Alfonso Calderón, Iberdrola’s Sales Director for Spain.

Iberdrola was also recently the first Spanish company to join the Climate Group’s EV100 initiative and has committed to electrify its entire fleet. Employees at the Spanish and UK sites will also be able to charge their cars at their workplace.