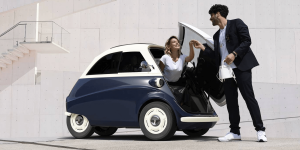 Artega has opened the order books for the Karo. From now on, the two-seater electric mini car in an Isetta design can be ordered through Artega’s sales department in Germany. The first deliveries are expected in the second quarter, at which point dealers will also be supplied with exhibition and demonstration vehicles.

Artega now officially calls the model the “KARO-Isetta”. The model is to bear this nickname now that the heirs of the ISO-Isetta inventor Ermenegildo Preti have given their okay. The KARO-Isetta is said to have a speed of up to 90 km/h and a range of up to 200 kilometers.

Initially, the car will be offered in two versions: the Intro series as a limited edition; and the Edition version. Artega has not given details on technical differences, but the Intro series will bear a signature and individual numbering. The limited Intro costs 18,500 euros plus VAT. (21,995 euros gross in Germany), the Edition will be available from 15,122 euros plus VAT. (17,995 euros gross in Germany). Both models will be produced in 54 and 55 copies respectively – in reference to the Isetta’s premiere in 1954 and its successful performance at the Milli Miglia in 1955. A wall box with a matching type 2 cable can be ordered for 595 euros. The configurator currently only lists the two special models, Artega does not mention the prices for the later models.

The vehicle is manufactured in Delbrück where the production of the small electric car will apparently be CO2-neutral. The environmental footprint of the small car has been kept as low as possible. “To source the lithium for our smallest battery, we need only as much water as it takes to produce about 30 grams of beef or four cups of coffee,” says Artega Managing Director Klaus Dieter Frers.

The market launch of the Karo has become possible because Artega and the Swiss company Micro Mobility reached an out-of-court agreement at the end of November 2019. With the Microlino, Micro Mobility had once developed an electric Isetta clone and wanted to have it produced by the Italian manufacturer Tazzari. In December 2018, the German sports car manufacturer Artega took over all rights for the production of Tazzari’s Swiss electric city runabout – at that time it was said that the Microlino would be produced in the NRW city of Delbrück in the future.

In May 2019, the disagreement between Micro Mobility and Artega became public when its managing director Klaus Frers announced that the Karolino would be a direct competitor to the Microlino. According to Frers, this was a sister model that had been improved in more than 150 points. Artega also stated in the current announcement that “in over 50,000 hours of development work” the car was “developed on the basis of the pre-series taken over from Italy in December 2018”, with more than 90 per cent of all parts being redesigned.

In the course of the dispute with a court-imposed advertising ban for the Karolino, Artega renamed the car Karo and exhibited it at the IAA. In the out-of-court settlement, which was made public at the beginning of January 2020, the two companies agreed to be allowed to continue to develop their own models. While Artega is now taking orders, Micro Mobility has teamed up with the Italian company CECOMP. Micro Mobility’s Wim Ouboter explained that the start of production, now scheduled for 2021, has a lot of catching up to do in development – there have been some delays due to the legal dispute.

2 Kommentare zu “Artega is accepting orders for the Karo”