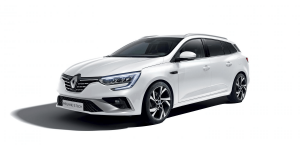 Renault has presented the revised Mégane, which will be available for the first time from summer 2020 with the plug-in hybrid drive called E-Tech. Although the PHEV has two electric motors, it has a relatively small battery.

The Mégane’s powertrain consists of a 1.6-litre petrol engine, two electric motors and a multi-mode transmission. Renault states the system power at 118 kW but does not mention the performance data of the electric motors. The system will benefit from a technology “that focuses on energy recovery and is directly inspired by our Formula 1 expertise,” as Renault writes in the press release. The clutchless gearbox, which Renault mentions in particular, is said to be characterised by barely perceptible gear changes and “outstanding efficiency”.

The efficiency must also be good because the electric range in the WLTP cycle of 50 kilometres (in the city cycle of the WLTP even 65 kilometres) must be managed with only 9.8 kWh. However, the manufacturer does not specify here whether this value is the net or gross capacity of the high-voltage storage unit. Purely electrically, the Mégane E-Tech is said to be able to travel at speeds of up to 135 kph.

Renault does not make any statements in the announcement about the charging possibilities and the PHEV’s charging capacity. The published photos show only a charging socket located above the right rear wheel, and the fuel filler neck sits above the left rear wheel.

At the market launch in summer 2020 the plug-in hybrid will only be available in the estate version called Grandtour, according to Renault the hatchback version will follow “at a later date”. The prices for both versions are not yet known.

Besides the partly electric drive, smaller elements of the design were changed in the course of the facelift, and the cockpit was also modernised. Here you can now get the latest version of the French “Easy Link” multimedia system. Furthermore, Renault now offers new assistants up to an autonomous level 2 system for the Mégane.