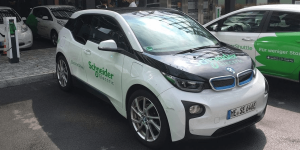 Schneider Electric has joined the Climate Group’s EV100 initiative, committing to the electrification of its corporate fleet. By 2030, Schneider Electric plans to replace 14,000 vehicles in over 50 countries with electric cars.

Schneider Electric wants to establish the necessary charging infrastructure in all major offices and factories by 2030. The first “flagship charging parks” will also demonstrate the advantages of the company’s own “EcoStruxure” architecture with microgrid functions and its own energy management.

“At Schneider Electric, we committed to net-zero operational carbon emissions by 2030, in line with a 1.5°C science-based climate trajectory,” said Leonid Mukhamedov, Executive Vice President, Global Strategy at Schneider Electric. Joining the EV100 initiative is an important step towards achieving this goal.

In addition to EV100, Schneider Electric also participates in the Climate Group’s RE100 and EP100 initiatives. The RE100 initiative is designed to increase the demand of companies for renewable energy and thus the supply of renewable energy – in 2030, member companies are to work exclusively with green electricity. EP100 aims to bring together a growing group of smart energy companies committed to improving their energy productivity and efficiency. Specifically, energy productivity is to be doubled by 2030 compared to the base year 2005.