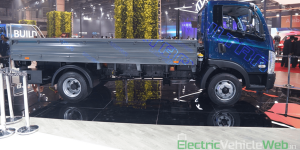 The Indian automobile manufacturer just presented India’s first own commercial electric truck, the Tata Ultra T.7. The 2+1 seated intermediate truck is not yet ready for market launch, as the vendor reaction is reportedly being studied first.

The Ultra T.7 will run on a 62.5 kWh battery combined with a 245 kW motor featuring 2,800 Nm torque. The top speed has been estimated at 80 kph and a range over 100 km was announced by the manufacturer. As previously mentioned, up to three persons can fit inside the vehicle, and charging can be done in “approximately two hours” using the DC fast charging port.

The cabin is surrounded by steel, and is fitted with an anti-roll bar for increased safety in unknown road conditions. The manufacturer also boasts of “best-in-class driving comfort, on-road performance and agility ” for their first electric commercial truck.

While this is Tata’s first electric utility vehicle, the Indian automobile manufacturer has been steadily electrifying cars since their first electric passenger car completed back in 2017. At the time, the Indian government had ordered 10,000 of the fully electric Tigor small passenger cars. Since then, the company has come out with more exciting concepts, as well as expanding electric bus production in India, which heavily struggled with pollution in recent years.

A major driving factor behind the electrification on the Indian subcontinent is the FAME programme, in which the Indian federal government is providing more than €1 billion worth of subsidies in order to help grow the local EV market, as well as expand charging infrastructure, which is expected to be one of the biggest hurdles in electrification in the South-East Asian nation. We are certainly happy to see expansion and innovation taking place in India, whose EV industry has stood in China’s deep shadow for some time. A local battery production is also beginning to take off, as Indian Oil announces factory plans yesterday.