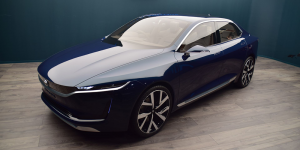 Tata states that the concept gives an impression of its future design language. Indeed, it combines traditional elements that are typical for Tata with new compentens – the most striking are a coupe-like form and a vast panoramic roof.

The EVision concept measures 4.8 metres in length and is based on a stretched version of Tata’s new alpha platform. The li-ion battery is located in the sedan’s floor. Tech specs have not yet been provided. Rajendra M Petkar, CTO and Head Power Systems Engineering at Tata Motors, expects demand for EVs to rise significantly in the next decade: “There has to be adequate localisation for battery costs to come down. We believe that between 2020 and 2025, there will be an inflection point where electric vehicles will see faster adoption. We have to be ready for that scenario.”

Just recently, Tata Motors took the occasion of its home show in India to put the all-electric version of its Tama Racemo sports car on display at the Auto Expo. Moreover, the Indian carmaker has been chosen last year by the Indian government in Delhi to supply thousands of electric cars to government-run Energy Efficiency Services Ltd (EESL).
thequint.com, indianautosblog.com