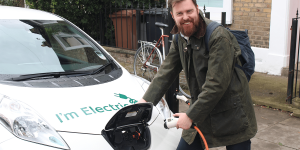 The London Borough of Hackney announced plans to construct an additional 182 electric vehicle charging points over the course of this year. At the same time, the Council is launching a feasibility study into the rapid expansion of charging infrastructure in the borough.

The charging infrastructure expansion is being funded by the Department for Transport’s Go Ultra Low City Scheme, with match-funding from the Council. With the installation of the charging points in existing electrical infrastructure, the organizers hope to disrupt traffic as little as possible during the transition. Additionally, the council has asked for residents and businesses to make their own suggestions as to where chargers were needed.

Next to asking the locals for their input, the council is also launching a feasibility study to “investigate the feasibility of delivering lamp column charge points on all of the borough’s residential roads.” This is part of a larger effort to lastingly decrease the pollution and climate change emissions being emitted on British roads, as cabinet member for energy, waste, transport and public realm, Councillor Jon Burke added: “When we declared a Climate Emergency, we pledged to do everything in the Council’s power to reach net-zero emissions by 2040, which includes taking action to rapidly reduce transport pollution, the UK’s largest and growing source of global warming emissions.”